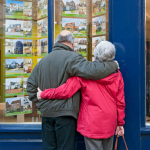 Halifax has raised its age limit for mortgage borrowers by five years to 80 in a further sign of the financial pressure on homeowners as property prices continue to rise.
The move by Britain’s biggest mortgage lender means that a 55-year-old customer could take out a 25-year loan and repay the loan before his or her 80th birthday.
However, Halifax says that any borrowing beyond retirement age will require proof of retirement income.
Workers are no longer compelled to retire at the age of 65 and the state pension age will rise to 67 for both men and women between 2026 and 2028.
Jonn Elledge
By catering to those whose family can stump up a down payment on a house, the bank is widening the home owning divide.
Read more
Simon Collins, of mortgage broker John Charcol, said: “This is a very under-served area of the market, but I think they could have gone even further. It would be nice if we did see some others following suit, and maybe even edge up to 85.
“Lenders have come under a lot of pressure from the regulator over this. These are very low-risk borrowers with excellent track records with credit scores – why wouldn’t you want to lend to them?”
Halifax said: “As demographics and working habits continue to change, we continually review our products and policies to ensure they reflect the evolving needs of our customers, including those who wish to continue working longer.”
The UK already has almost 12 million people aged over 65 and a growing number of lenders have been aiming mortgages at this group.
Hodge Lifetime is offering the 55+ mortgage that is only available to applicants over that age, with 85 as a cut-off age for applications.
The property must be in England or Wales and be worth between £170,000 and £1m. The minimum loan is £20,000 and the maximum £500,000, although the highest loan-to-value ratio is 60%.
Epsom-based National Counties building society will consider applicants up to age 89 but will not take into account employment income beyond 70. Its deals include a five-year fixed rate mortgage at 3.29%.
However, most mainstream lenders still have far lower age limits. Barclays and RBS have an age limit of 70 for their mortgages, while HSBC, Nationwide and Santander impose a cut-off at 75.
Mortgage lending surged 64% to £17.1bn in March – the highest figure since April 2008, just before the financial crash struck – as buy-to-let speculators and second-home buyers rushed to beat an increase in stamp duty, according to the British Bankers’ Association.
Mortgage borrowing remains at historically ultra-low levels, with the average two-year fix falling from 2.97% to 2.55% in the past 12 months, while the average five-year fixed rate dropped from 3.53% to 3.19% over the same period, according to Moneyfacts.
Rob’s Comments,
Yes Yes Yes! This is good news but let us consider for one minute that Halifax had an age 67 years’ limit without proving retirement income was the lowest age limit out there with the main stream lenders.
The fact that Halifax has come into line with main stream is of no surprise and in real terms it means that proof of retirement is only required after age 70 so, Halifax has extended it max lending age by 3 years.
I see this time and time again. Banks look at the FCA rules, make an overzealous procedure, tell all the brokers that everyone will follow suit and guess what??? The lender caves and follows the heard. Classic for this is Virgin Money and affordability. After years of telling brokers that all lenders will follow their pre-set stringent affordability criteria this year they change tac and follow the rest of the lenders. Why? Because they are not competitive, brokers stop using them and they lose money.

Some of the main causes of bad credit are missed END_OF_DOCUMENT_TOKEN_TO_BE_REPLACED

“The Scottish Government is launching a £10m support END_OF_DOCUMENT_TOKEN_TO_BE_REPLACED

“It said £500m of additional funding would be needed to END_OF_DOCUMENT_TOKEN_TO_BE_REPLACED