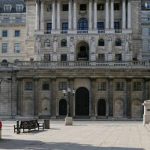 The Bank of England’s Monetary Policy Committee has voted by a majority of 7-2 to maintain Bank Rate at 0.25%.

The Committee judged that the lower level of sterling continues to boost consumer prices broadly as projected, and without adverse consequences for inflation expectations further ahead.
It also expects pay growth to pick up over the forecast period and believes “subdued household spending growth is largely balanced by a pickup in other components of demand”.
The MPC added that since the August Report, “the relatively limited news on activity points, if anything, to a slightly stronger picture than anticipated”.

GDP rose by 0.3% in the second quarter, as expected in the MPC’s August projections, although initial estimates of private final demand were softer than anticipated.

Twelve-month CPI inflation rose to 2.9% and is now expected to rise to above 3% in October.

However a majority of MPC members judge that, “some withdrawal of monetary stimulus is likely to be appropriate over the coming months to return inflation sustainably to target”. All members agree that any prospective increases in Bank Rate would be expected to be at a gradual pace and to a limited extent.

Nick Dixon, Investment Director at Aegon, commented: “If employment and inflation inform interest rate forecasting, then both would suggest a rate rise is overdue. Unemployment is the lowest in 42 years and inflation exceeds its 2% target. The challenge, however, is understanding whether inflation is structural or a blip linked to the 2016 decline in sterling.
“With increasing demand for pay rises to make up declining real income, the inflation challenge is becoming structural. The pressure is on to increase public sector wages to counter inflation, but with a slim majority the government will be wary about matching wage increases with a tax rise. Hence fiscal policy will loosen and monetary policy will tighten to maintain macro-balance. While there has not been a rate rise today, over the next 12-24 months rates will rise higher and faster than market expectations. This will be good news for those seeking annuity income or with cash savings and bad news for mortgage holders.”

Maike Currie, investment director for personal investing at Fidelity International, added: “It’s now almost a decade since the Bank of England first took the knife to rates and despite talk about a rate hike being around the corner, it comes as little surprise that the Bank of England’s Monetary Policy Committee is still in no rush to raise rates from their historic lows, with a majority 7-2 member voting to hold rates at 0.25%. So, despite hawkish sounds from policymakers at the Old Lady of Threadneedle Street, it’s still the doves that rule the roost.

“Last month, the committee’s message was that interest rates would probably have to rise, and by more than markets were pricing in. But there seems little urgency to tighten, at least outside the small group that favoured a hike. Currently, the economic data paints a mixed picture. While manufacturing numbers look stronger, construction figures have dipped. The jobs market continues to improve, but while unemployment is at a 42-year low, our pay packets are going nowhere.”

Robs view: Looks like there will be a small increas. Customers and more importantly VOTERS will not be able to afford there homes if rates increase significantly.

Some of the main causes of bad credit are missed END_OF_DOCUMENT_TOKEN_TO_BE_REPLACED

“The Scottish Government is launching a £10m support END_OF_DOCUMENT_TOKEN_TO_BE_REPLACED

“It said £500m of additional funding would be needed to END_OF_DOCUMENT_TOKEN_TO_BE_REPLACED