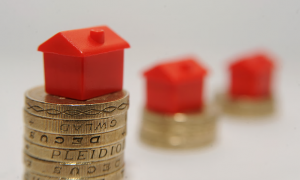 Britons are weighed down by more mortgage debt than last year, but rising wages and low inflation means they are better placed to cope with a hike in interest rates, a Bank of England study has found.
The average mortgage debt of a British householder has risen to about £85,000, compared with £83,000 in 2014, after a year of rising house prices and buoyant demand from first-time buyers.
The study found that higher debt levels weighed heavily on mortgage-payers alongside the impact of the government’s austerity measures, which have cut the incomes of about a third of households.

Aggregate household debt-to-income ratio and mortgage debt-servicing ratio. Illustration: ONS and Bank of England calculations
However, Threadneedle Street concluded that a 2% rise in average wages this year and low inflation had increased disposable incomes enough for the average mortgage-payer to cope with a rise in base rates to 2%.
Unsecured debt, which includes car loans and credit cards, remained at an average £8,000 per household this year.
The study is likely to provide policymakers with the comfort that a rise in interest rates next year will have only limited impact on the ability of households to meet payments on their debts.
But thousands of low income families and first-time buyers with high loan-to-income mortgages would still face a tough time when interest rates begin to rise. A rise in rates to 2% would increase the share of mortgage holders paying more than 30% of income on repayments from 9% to 14% after a rate rise.
And renters continue to have an elevated concern about their ability to pay for their accommodation, despite a fall since the peak in 2013. More than a quarter said their rent remained a “heavy burden”, down from 36% two years ago.

Measures of financial distress for renters. Illustration: BHPS, NMG Consulting Survey and Bank calculations.
Matt Whittaker, chief economist at the Resolution Foundation, said: “Living standards enjoyed a long overdue rebound in 2015, and it’s encouraging to see this feeding through into improved household budgets and reduced financial distress.
“But concerns remain about the financial position of many households, notably renters and the not insignificant group of mortgagors who continue to struggle to meet their monthly payments, despite years of rock bottom rates.

Some of the main causes of bad credit are missed END_OF_DOCUMENT_TOKEN_TO_BE_REPLACED

“The Scottish Government is launching a £10m support END_OF_DOCUMENT_TOKEN_TO_BE_REPLACED

“It said £500m of additional funding would be needed to END_OF_DOCUMENT_TOKEN_TO_BE_REPLACED