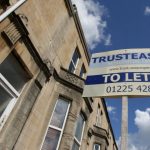 The amount borrowed by prospective landlords fell 16 per cent in the year to January, as strict new rules on buy-to-let homes took their toll.

Figures by the Council of Mortgage Lenders (CML) showed would-be landlords borrowed £800m to buy new homes in January, down from £1.4bn the year before, and £900m in December.
The number of people taking out mortgages on buy-to-let properties fell to 5,900, from 9,700 the year before, and a peak of 29,100 in March last year.
The news came after figures published yesterday showed rent increases have fallen to their lowest since 2013.

The fall followed new rules hiking stamp duty on buy-to-let homes by three per cent, which were introduced in April last year. It followed the introduction of rules banning landlords from claiming interest rate relief on mortgage payments.

Meanwhile, home buyers borrowed £8.4bn in January, down 28 per cent on the month before and flat on the previous years. First-time buyers borrowed £3.6bn, up seven per cent year-on-year, while those moving house borrowed £4.9bn, down four per cent on the year before.
“January gives the impression of a flattish market overall, albeit one with a resurgent remortgage sector,” said Paul Smee, director general of the CML.

“Buy-to-let house purchase activity continues to be weak, despite strong buy-to-let remortgage levels. This will likely remain so going forward as lenders tighten affordability criteria ahead of the PRA mandated stress tests, and the introduction of tax changes in April.”

“Remortgage activity surged on the month and the year, as we are seeing more and more parents on the ground looking to release equity in their homes, to support increasing numbers of young people who are leaning on their parents for support to get onto the property ladder,” added Paul Smith, chief executive of Haart Estate Agents.

“With rents sent to increase as landlords are squeezed, and ONS figures showing that house prices have reached 10 times the average salary for a third of people in England and Wales, parents are becoming increasingly concerned that their children will not have the same opportunities for home ownership that they did.”

Rob’s comments. Is it any wonder??? The government raise taxes on something that someone chooses to purchase and will that person do? NOT purchase it. DAAAAA!
The government need to encourage entrepreneurship, enterprise and economic growth then charge taxes on the profits. The can’t keeping driving self-motivated people away otherwise there will be nothing to charge tax on.

Some of the main causes of bad credit are missed END_OF_DOCUMENT_TOKEN_TO_BE_REPLACED

“The Scottish Government is launching a £10m support END_OF_DOCUMENT_TOKEN_TO_BE_REPLACED

“It said £500m of additional funding would be needed to END_OF_DOCUMENT_TOKEN_TO_BE_REPLACED