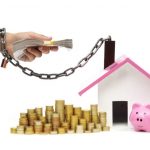 The chance to lock into an ultra-cheap mortgage is set to disappear, borrowers are being warned, as several factors now point to a period of rising rates.

Those who have not yet switched to a fixed-rate deal should act quickly.
Mortgage rates have been falling for years, driven partly by a historically low Bank Rate but also by lenders’ increased competition for a smaller overall pool of borrowers.
And while in the period immediately after the financial crisis it was difficult for many borrowers to obtain mortgages, most lenders have relaxed their criteria. Those with smaller deposits are now more able to secure loans.

In order to be able to move to a lower rate, borrowers need to be on a “variable-rate” mortgage where there are no penalties. They could also be at or near the end of existing fixed-rate deals.
Variable-rate mortgages come in many forms, including “trackers” where repayments follow the movement of the official Bank Rate. Lenders also have their own “standard variable rates” which they set themselves and which are loosely based on the Bank Rate.
Many borrowers roll over onto standard variable rates when their shorter-term deals end.
Should you opt for a fixed rate of two years, or should you go for those deals offering a longer period of certainty, such as five years or even ten?

Historically two-year rates have been most popular. In general, the shorter the term, the lower the rate. But one trend in recent years has been for longer-term rates to fall steeply as well.
David Hollingworth of mortgage broker London & Country said longer-term fixes are becoming more popular.

“Most people go for between two and five years, but the gap between five and 10-year rates has narrowed and that brings more people in for longer deals. Of course, that ties you in and that’s harder for people to come to terms with.”
“But borrowers can’t rate to stay this low forever. With higher inflation, locking into a rate looks like the right thing to do. Can Bank Rate really go any lower? There’s very little upside in having a variable rate.”

Fixing your mortgage rate makes sense in a range of market conditions. But the following four points explain why now fixing your rate should be a matter of urgency.

1. Some mortgage rates are already creeping up
Bank of England data shows the cheapest two-year fixed deals may have already come and gone. In November, last year, the average two-year fix was 1.31pc, but by the end of February 2017 the average stood at 1.35pc.
Interbank lending rates – known also as “swap” rates – are an indicator of where future mortgage rates will head. That’s because they reflect the cost to the banks of securing the money they lend. The two-year swap rate has risen 40pc since October, and the five-year rate has nearly doubled – up 95pc.
This suggests further rises are on the cards for homeowners.

2. Inflation will hit 2.7pc this year
Inflation will rise above the Bank of England’s official 2pc target in the first four months of the year, per the Office for Budget Responsibility. It said inflation will peak at 2.7pc, as measured by the consumer prices index, in the last quarter.
A weakened pound, the rising price of oil and insurance premium hikes will force prices up over the course of 2017, the OBR said in notes published alongside last week’s Budget.
You must go back to December 2013 for the last time inflation hit 2pc.
A rise in the cost of living will put pressure on the Bank of England to raise its leading Bank Rate from its current all-time low of 0.25pc.
Variable mortgage rates would rise in line. Fixed rate deals for borrowers who decide only then to switch would also be higher.

3. Political uncertainty
Future wage growth and cost of living are outside of households’ control. Fixing mortgage costs means at least one element of personal finances is predictable.
The triggering of Article 50 by the Government signals the start of a two-year countdown to Britain’s exit from the EU. Taking out a five-year (or longer-term) mortgage loan locks you into a rate today that will fix repayments well into Britain’s first years outside of the EU.
Political uncertainty in Europe and further afield could also impact Britain’s economic growth, the value of the pound and interest rates.

Andrew Bowfield, 33, and his partner Nina Morley, 34, have just re-mortgaged to a five-year fixed rate deal with Bank of Ireland. They made the switch after their two-year fixed rate deal with Yorkshire Building Society, charging 2.94pc, came to an end.
Since the couple took out the Yorkshire deal rates in general have fallen considerably.
Thus, their new mortgage is £40 a month cheaper, even though the rate is fixed for five years rather than two.

They decided a five-year deal was more sensible and were “very very happy” with the 2.49pc rate they were offered by the Bank of Ireland.

Mr Bowfield, an engineer, said: “After the vote to leave the EU you immediately saw the pound fall and it seems clear we will experience some inflation. We took the decision that because the mortgage market was fiercely competitive we should take advantage of a longer fix than we would have looked at ordinarily.”

“It was a combination of Brexit and the feeling that I couldn’t see how, over the next few years, mortgage rates could move substantially down.”
4. Did Philip Hammond’s Budget could limit your future borrowings
The Chancellor has faced a furious backlash since last week’s Budget, not least from members of his own party.

His attack on business owners and the self-employed included plans to increase National Insurance rates and reduce the tax-free allowance for dividends. Both measures could spell a fall in the incomes of millions of people.

Lenders must apply strict “affordability” checks before handing out mortgages, so anything that cuts borrowers’ income will restrict the amount they can borrow.
Mr Hollingworth said: “Behind the scenes, lenders will factor this in. For the self-employed it can be hard enough to get a mortgage as it is, you normally need proof of at least two years of income.”

Rob’s comments. Yes, I agree that rates are at an all-time low but over the last year I have seen articles saying that rates will go up, like this one, and articles saying rates will come down. What I can report is that rates are going up for 90 and 95% mortgage not because of any economic condition. They are increasing because banks do not want any more exposure in this market.
Time will tell if the rates will increase and if they do it will be slowly. Mortgage holders will have plenty of time to re-mortgage to a long term, low fixed rate deal.

Some of the main causes of bad credit are missed END_OF_DOCUMENT_TOKEN_TO_BE_REPLACED

“The Scottish Government is launching a £10m support END_OF_DOCUMENT_TOKEN_TO_BE_REPLACED

“It said £500m of additional funding would be needed to END_OF_DOCUMENT_TOKEN_TO_BE_REPLACED