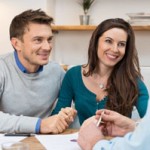 There were more first-time home buyers in 2016 than at any time since the start of the financial crisis, per research by the Halifax.
The lender estimated there were 335,750 first-time buyers last year, the highest figure since 359,900 in 2007.
However, the average first-time deposit has more than doubled since 2007 to stand at more than £32,000.
The Halifax also found the average price of a first home broke through the £200,000 barrier for the first time.
Halifax housing economist Martin Ellis attributed the increase in first-time buyer numbers to continuing low mortgage rates and high levels of employment, which had “supported the market”.
“Government schemes such as Help to Buy have improved affordability, enabling more first-time buyers to buy their own property.”
Longer mortgage terms
The Halifax First-Time Buyer Review estimated that the number of buyers entering the market rose by 7.3% last year and is now 75% higher than the all-time low of 192,300 first-time purchases made in 2008.
However, it still has some way to go to match the peak of 402,800 in 2006.
The average first-time deposit across the UK a decade ago was £15,168, but this stood at £32,321 last year.
Rising property prices also mean that first-time buyers are increasingly taking out longer mortgages.
Last year, 60% of first-time buyers took out a mortgage of 25 years or longer. More than a quarter (28%) took out a 30 to 35-year term mortgage.
Ten years ago, only 36% of people getting on to the first rung of the property ladder borrowed for longer than 25 years.
However, there are big regional variations.
While the average price paid by a first-time buyer across the UK in 2016 was a record £205,170, in London it was nearly double that at £402,692, which was another all-time high.
In the least expensive region, Northern Ireland, the average cost of a first property was £115,269.
The average deposit paid in Northern Ireland has fallen by a fifth in a decade to £16,695, the lowest in the UK.
Meanwhile the average deposit in London has shot up over that time by 276% to £100,445.
Rob’s comments. This is good to see. First time buyers increasing over the long term is great for the overall housing market but we need to be careful as todays FTB’s have never experience interest rates above 5% and if rates were to return to that level todays FTB will have a payment shock.

Some of the main causes of bad credit are missed END_OF_DOCUMENT_TOKEN_TO_BE_REPLACED

“The Scottish Government is launching a £10m support END_OF_DOCUMENT_TOKEN_TO_BE_REPLACED

“It said £500m of additional funding would be needed to END_OF_DOCUMENT_TOKEN_TO_BE_REPLACED