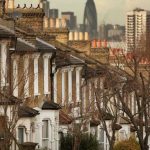 During July – the first full month after the Brexit vote – 60,912 new mortgages were approved.
That was down from 64,152 approvals in June, and was the lowest total since January 2015.
The total amount lent out for house purchases was £10.4bn, down from £11.1bn in June.
The figures also show a 12.4% drop in the number of mortgage approvals on the same month a year ago.
The number of approvals has been falling steadily since March, when there was a rush to buy ahead of tax changes.
“Mortgage approvals for house purchases have progressively slowed after being buoyed in the first quarter by buy-to-let and second home sectors rushing to beat April’s Stamp Duty increase for these sectors,” said Howard Archer, chief UK and European economist at IHS Global Insight.
“It is also highly possible that mortgage activity was hit in July by heightened uncertainty following June’s vote for Brexit.”
Consumer credit
The Bank of England figures also show that growth in the amount being borrowed by consumers on credit cards and other loans eased off in July.
UK residents borrowed an extra £1.2bn during the month – down from £1.9bn in June, and 17% less than in July 2015.
This is the first time that growth in unsecured consumer credit has slowed since December 2014.
However, credit card lending by itself rose by £0.5bn in July to a record of £65.5bn.
“We remain concerned that while most households will be able to handle this extra borrowing, a minority of households could find themselves exposed to financial difficulty,” said Joanna Elson, chief executive of the Money Advice Trust.
Rob’s Comments. In Lanarkshire, we have an unusual phenomenon happening. People will not put their house up for sale unless they find a house they want to buy first. What this is causing is a shortage in the housing market because if people are waiting for that perfect house and a seller who owns that perfect house will not put it on the market until they find a perfect house and yet the person selling that perfect house is waiting to purchase their perfect house this creates the perfect chicken and egg scenario. Sellers are going to have to put their house on the market in the old fashion manor, selling before they buy otherwise they may find themselves not being able to move at all.

Some of the main causes of bad credit are missed END_OF_DOCUMENT_TOKEN_TO_BE_REPLACED

“The Scottish Government is launching a £10m support END_OF_DOCUMENT_TOKEN_TO_BE_REPLACED

“It said £500m of additional funding would be needed to END_OF_DOCUMENT_TOKEN_TO_BE_REPLACED